MyPM Synchronisation – How It Works

MyPM provides the ability for users to Sync with SAP and get back delta information in a timely fashion. It does this by associating MyPM profiles with users and pre-assembling flattened data in SAP /soltius/ tables. This means that when a user syncs with SAP the assessment of master data that the user needs for that device is accelerated because the process does not need to evaluate all the SAP change objects and then ‘flatten’ the required data. To support this sync functionality a number of permanent tables exist in the /soltius/ SAP namespace. These tables are populates in two ways:

1. When a MyPM administrator triggers the generation of a Profile. They would do this after creation or editing and time the generation out of hours to impact on as few personnel as possible. This ‘regeneration’ will trigger a full Sync of all profiles with SAP where a user has been allocated that profile.

2. When SAP users update relevant objects then this triggers change events in SAP. These change events are linked to MyPM functions that evaluate if the object is associated with an Active profile and amends the assembled MyPM master data as required. For a list of the tables used in this process see the article MyPM Master Data Tables.

Sync settings, including the ability set set up Sync reminders, is configured in the Maintain Core Settings Sync Tab.

What Data is User Specific and What’s Shared?

Some of the sync data is unique to users and some is shared by all MyPM users on the device. The logic for this is as follows and has been changed (improved) post initial MyPM Base release:

All data related to Work Order and Notification is specific to the User on the device.

All master data and the Outbox is shared. Examples of master data are the Functional Locations and Equipment. The reason that the master data is shared is to reduce large data volumes on the device and because it’s most likely that personnel sharing a device would have the same profiles.

The reason that the Sync data is deliberately shared is because otherwise data could become ‘lost’ – i.e. if a user hands their device over to another, without Syncing, then all their data would remain unseen and unprocessed on the device until such time as they got that specific device back again – which can not be guaranteed. This is seen as being a bigger concern to proper maintenance operations that the implications below.

How is the Sync Process with SAP Initiated?

The sync process with SAP is always manually initiated by the user. The practicalities of implementing automation that have stopped us from pursuing this:

That said an optional MyPM feature, to alert users that its been x time since last sync, has been added to the MyPM development roadmap.

The following illustrates the sync process: 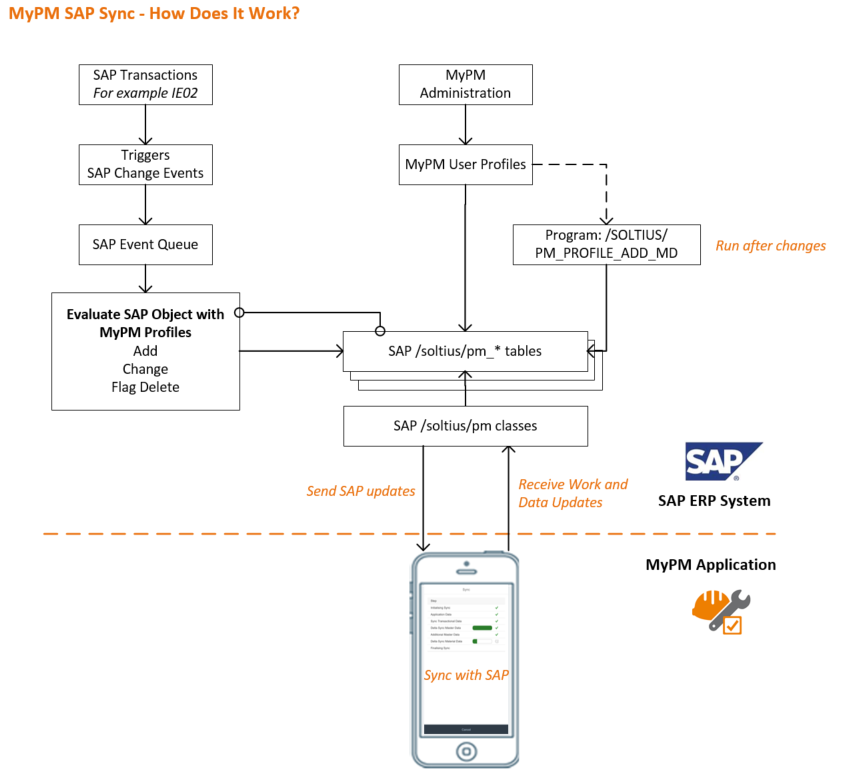 The pre-population of SAP object master data does increase the database size accordingly. The alternative would be to assess change logs over thousands of objects in real time on each sync event. That would dramatically degrade performance to the user and disproportionately increase the load on the SAP system. The total size of MyPM related data is reported in the Administration settings tab.